Anoectochilus is a poorly known genus of about 50-60, mostly terrestrial species extending from Malaysia, India, and southeastern Asia to Japan and some Pacific islands. Members of this genus are often called "jewel orchids" because their attractive foliage may be green or variously colored, often with intricate veins on the leaves. The creeping or decumbent stem produces roots at the nodes, and the alternate leaves are usually confined to the upper portion of the plant. The inflorescence is a relatively open terminal raceme of greenish yellow to white resupinate flowers in which the petals and dorsal sepal form a hood over the column. The labellum has an open appearance because of the sharp bend of the middle lobe. 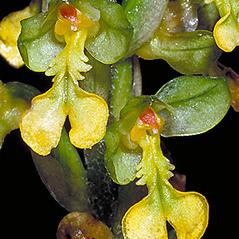