Bulbophyllum is the largest genus in the Orchidaceae with an estimated 2,000 polymorphic epiphytes, lithophytes, or rarely terrestrial orchids. The largest number of species occur in South East Asia but they occur in both the Old and New World tropics and subtropics. Individual plants in this genus can be small but they can form large mats by clonal propagation from rhizomes. African species have small and occasionally striking plants and flowers while American species typically have small inconspicuous flowers. Many Asian species have delightful flowers that often produce a strong fragrance, sometimes pleasant or sometimes fetid. Flowers of some species are so small that they are only visible with a magnifying lens! Petals are usually smaller than sepals and flowers often have a hairy, simple to 3-lobed lip that is sensitive to even the slightest touch or breeze. It unbalances visiting insects and the unsuspecting insect becomes attached to the pollinia and carries it to another flower. The floral colors range in virtually every hue, except blue. Many of the species were formerly included in the genus Cirrhopetalum. 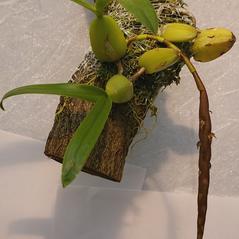