Camaridium, a genus that is related to and long considered to be part of the genus Maxillaria, consists of about 80 species found in low to mid elevation in New World tropical and subtropical forests. One species occurs as far north as Florida but most occur in the West Indies through Central and Latin America as far south as Bolivia. The species are terrestrial, lithophytic, or epiphytic and growth forms are highly variable. Stems are rhizomatous with compressed and tightly packed pseudobulbs that are most often ovoid or oblong with 1-2 leaves. Solitary flowered inflorescences emerge from the base of the pseudobulb. Flowers are variously colored and range from large and showy to inconspicuous. 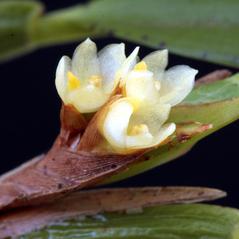