Heterotaxis is a small genus of neotropical epiphytic orchids, occasionally lithophytes, which were previously considered part of the genus Maxillaria. Widely distributed, species extend from south Florida to the West Indies, Mexico, and into Latin America as far south as Bolivia. Orchids in this genus tend to be relatively large and robust with pseudobulbs that are compressed, oblong and clustered, hidden by dark green leaves. The axillary inflorescence is erect, short, and often pale yellow, orange, or orange-red in color with resupinate, fleshy flowers that may not open entirely. 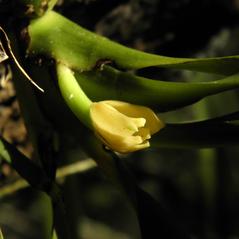