Pelexia is a genus of terrestrial, or rarely epiphytic, orchids distributed across the Americas in a range of habitats, such as oak-pine forests, grasslands, and savannas. The roots are thick and fleshy and the leaves usually form a basal rosette. The stems are erect and pubescent with several sheathing bracts and terminates in a raceme with several resupinate, tubular flowers. The dorsal sepal is pubescent and concave, connivent with the petals forming a hood over the column. The stigma is either entire or it is two-lobed, which mimics rudimentary lateral lobes. A deep nectary is united with the ovary, which allows bumblebees to pollinate the flowers. 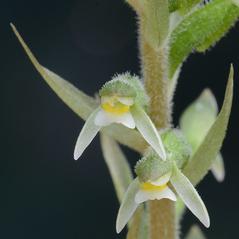