Tipularia is a genus of terrestrial orchids containing 3 species of which only one, Tipularia discolor, is found in North America; the other two are found in the Himayalas and Japan. In North America, Tipularia is distributed throughout the eastern and central United States, from Florida to Massachusetts and as far west as Texas. It produces a leaf in the fall which stays green throughout the winter; the leaf then senesces in the spring before the plant flowers, leafless, in the summer. Its leaf is green with dark purple spots and a distinctive dark purple pigmentation on the underside. It produces up to 55 small, somewhat asymmetrical flowers that are generally greenish yellow and sometimes tinged with purple. While Aplectrum hyemale also has a wintergreen leaf, Tipularia discolor can be distinguished by the presence of spots on its leaves and nectar spurs on the flowers. 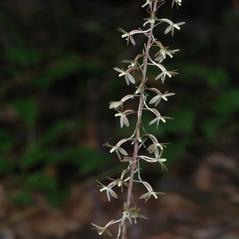