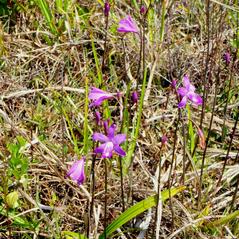 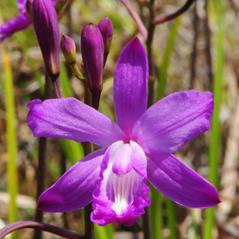 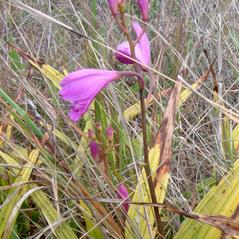 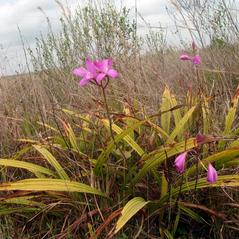 Bletia patula, the Flor de Pasmo, is widely scattered in Mexico, the West Indies, Central and South America and was believed to be extirpated in South Florida until it was recently rediscovered in Everglades National Park. This tall orchid has pseudobulbs up to 5 cm in diameter and produces long, plicate leaves similar to those of B. purpurea. From March into May, several flowers develop on an elongated raceme and range in color from pure white to a deep pink. The large sepals of the flowers, followed by the pendulous fruit capsule, help to distinguish this orchid from B. purpurea which usually blooms earlier in the season. This orchid prefers pinelands, and may occur on cliffs, banks and rocks in moist to wet areas.

Bletia patula is considered apparently secure because of its widespread distribution but it is critically imperiled in Florida, where heavy urbanization in the greater Miami area has destroyed much of its habitat.

These flowers do not contain nectar but use food deception to attract bees for pollination. Fruit set is generally low compared to those orchids that provide rewards to pollinators.