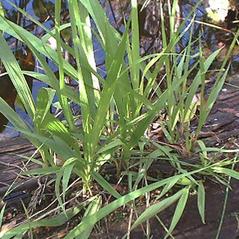 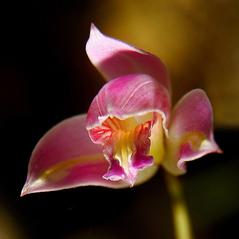 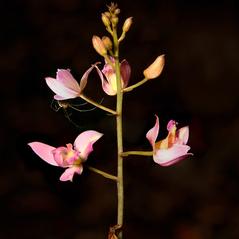 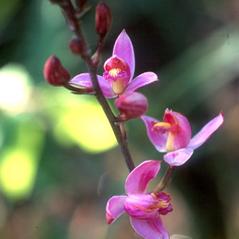 Bletia purpurea, commonly called Pine Pink, is distributed mainly in Florida's Everglades and Fahkahatchee Swamp and occurs in various parts of the West Indies, Central America, and northern South America. This orchid may produce both cleistogamous and chasmogamous flowers on the same plant, although this condition can vary from year to year. There are usually 3-5 light green leaves with 3-80 pink to purple or white flowers with a gold crest on the lip. In the Everglades, this orchid flowers from December to March and grows in open habitats where it prefers to wedge its bulb into rocky crevices. In the Fahkahatchee Swamp, flowering occurs from April to May and they grow in the shade, usually on stumps, floating logs, and at the base of cypress trees just above the water level.

Bletia purpurea is considered secure globally because of its widespread distribution, although it is threatened in Florida.

These flowers do not contain nectar but use food deception to attract various bee groups including Euglossa, Thygater and Melipona, a genus of stingless bees. In Florida, some plants do not have a rostellum and may be self-pollinating.

Labellum length:
Up to 18 mm