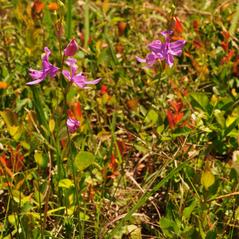 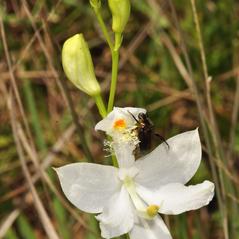 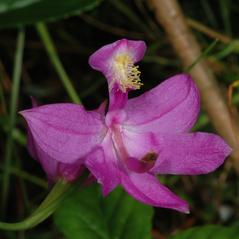 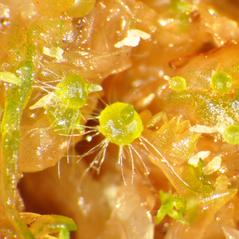 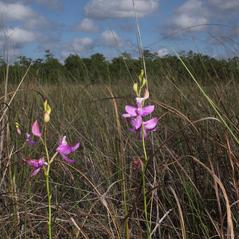 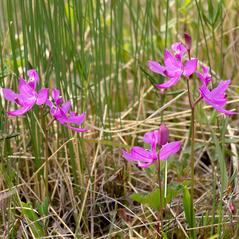 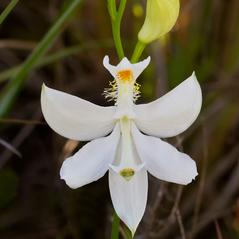 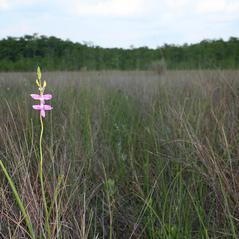 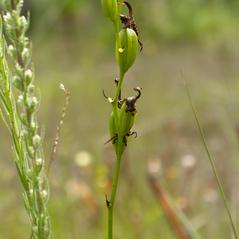 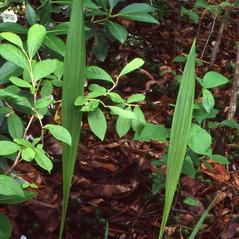 Calopogon tuberosus, commonly known as Tuberous Grass Pink, has the broadest range of any species in its genus: it is found across much of eastern Canada, the United States, and the northern Caribbean. It produces a grass-like leaf and up to 25 magenta, pink, or white non-resupinate flowers with a golden crest on the lip. It can be distinguished from other Calopogon species by its relatively large size and elongated labellum. It is known to form natural hybrids with C. pallidus. It prefers full sun and generally grows in moist meadows, grasslands, and savannas.

Calopogon tuberosus is considered globally secure, and is widespread and frequent throughout much of its range. In several northern states, however, it is considered rare or endangered.

The flowers of Calopogon appear to be upside down with the lip at the top of the flower and use deception to attract pollinators. Midway up the lip, a tuft of orange-yellow hairs resembles pollen which attract naive, recently emerged bees expecting a reward. Bees of sufficient weight, force the hinged labellum to swing down, dropping the pollinator backwards onto the column. Any pollen attached to the bee is pressed onto the stigma and as the bee exits the flower, it picks up a new load of sticky pollen found on the end of the column. This orchid is pollinated by a variety of bees including Bombus fervidus, Bombus nevadensis, Bombus ternarius, Bombus terricola, Bombus vagans, Megachile melanophaea and Xylocopa micans.