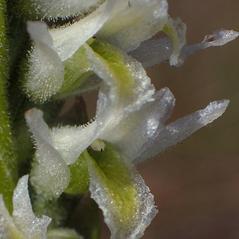 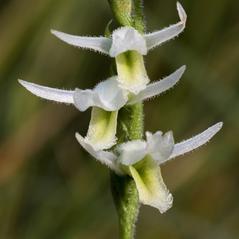 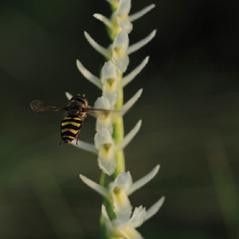 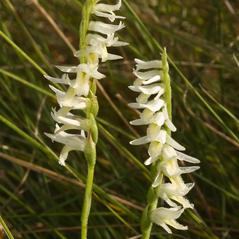 Spiranthes longilabris, the Long Lipped Ladies' Tresses, is endemic to the southeastern US from North Carolina to Florida, and extends westward to Texas. One of the most elegant ladies’ tresses, this orchid is sparsely covered with small hairs and produces 3-5 leaves that often wither at time of flowering. The inflorescence has 10-30 white flowers arranged in a tight spiral and the long labellum and spreading white sepals distinguish this orchid from other Spiranthes. This fall-blooming orchid grows in wet grasslands and damp pine flatwoods.

Spiranthes longilabris is considered vulnerable and may be critically imperiled in some parts of its range where drainage of sites would eliminate this orchid. Competition from grasses, sedges and woody vegetation which develop in the absence of fire may also threaten this species.

Pollinator information for this orchid has not been reported but pollinating insects usually work their way from the bottom to the top of a flower spike because flowers at the base of the spike mature first and produce nectar. Flowers on the same spike nearer the top have not matured, so the insect flies to an open flower on another plant, gathers nectar and deposits its pollen load, thus cross-pollinating the flower.