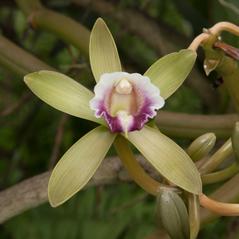 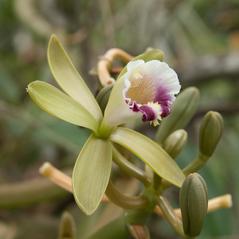 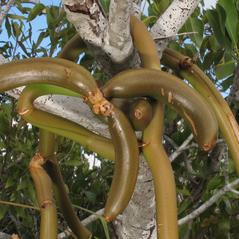 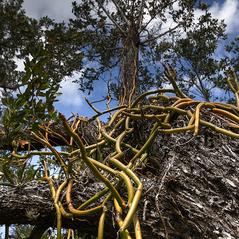 Vanilla barbellata, commonly known as the Worm Vine, is distributed in the West Indies and south Florida. Seedlings are initially terrestrial, germinating in the thick humus layer, but as the vine continues to grow upward, the older parts of the vine eventually die, leaving this orchid completely epiphytic. The vines turn bright orange in full sun and have one bract-like leaf per node and grow to 20 cm in length. Each inflorescence has 1-12 flowers with greenish-yellow sepals and petals. The colorful lip is tubular with a central strip of tiny yellow projections. Flowering occurs in June-July. Plants grow on trees, mostly in coastal mangroves and inland on trees in brackish wetlands.

Vanilla barbellata is endangered in Florida but apparently secure across its wider range.

Labellum length:
Up to 33 mm