Corallorhiza is a genus of terrestrial orchids containing 11 species distributed across temperate regions of North and Central America and Eurasia. Corallorhiza orchids are all myco-heterotrophic: they produce little to no chlorophyll, generally do not photosynthesize, and rely on mycorrhizal fungi almost exclusively for nutrition (often from the Russulaceae family of ectomycorrhizal fungi). They lack leaves and their stems are generally yellowish, brown or reddish purple instead of green; some species, however, are known to photosynthesize to a limited extent. They produce up to 40 small flowers, which are generally inconspicuous but can be showy, and vary in color from white to yellow to reddish brown. Corallorhiza are found in forests, with some species preferring drier forests and others growing in moister forests and bogs. 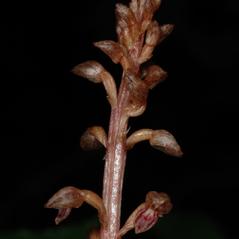 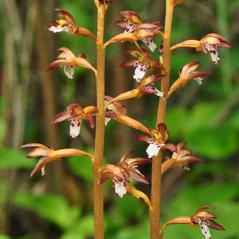