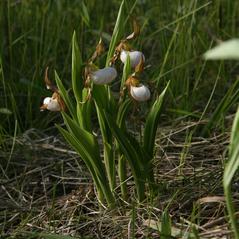 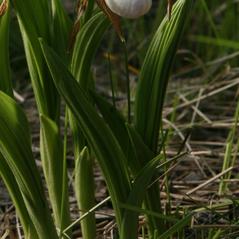 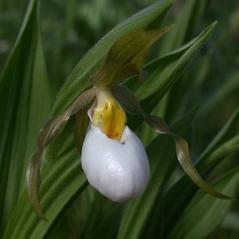 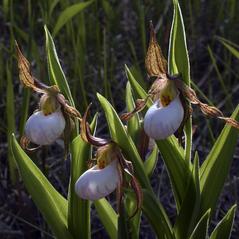 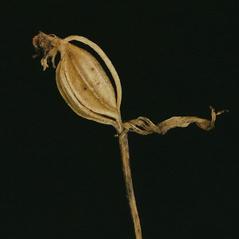 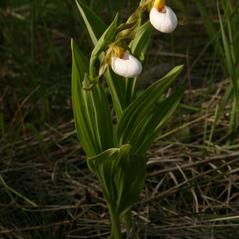 Cypripedium candidum, commonly known as White Lady's Slipper, is found in northeastern and central Canada and the United States, with a disjunct population in two counties of Alabama. Its labellum is a large, inflated, ovate pouch, white with a waxy or shiny surface and often striped with purple on the inside. It produces 3-5 leaves on its stem, and has yellowish green sepals and petals, often spotted with red or purple, which twist away in spirals. It grows in moist, sunny meadows, prairies, and fens; because it cannot tolerate shade, its population diminishes as woody canopies grow.

Cypripedium candidum is globally considered to be apparently secure, but is highly rare throughout much of its southern and central range. It can be distinguished from other Cypripedium species by the acute angle of the labellum orifice. When C. candidum is crossed with C. parviflorum, it produces a recognized hybrid designated as C. × andrewsii.

This orchid is pollinated by many kinds of bees including Andrena barbilabris, Andrena ziziae, Augochlorella aurata, Ceratina calcarata, Halictus confusus, Halictus ligatus, Lasioglossum anomalum, Lasioglossum cinctipes, Lasioglossum cressonii, Lasioglossum hitchensi, Lasioglossum pilosum and Lasioglossum rohweri. Hungry bees visit this orchid soon after they emerge in the spring to collect nectar and pollen. The size of the bees and their inexperience in exiting the flowers ensured contact with the anthers of the flowers to collect pollen. In one experiment it took up to 15 minutes for a bee to find its way out of the flower. The twice-stabbed stink bug, Cosmopepla lintneriana, has also been documented as a pollinator.