Cypripedium is a genus of terrestrial orchids containing over 45 species distributed across the temperate and boreal regions of North and Central America, Europe, and Asia. Cypripedium have a distinctive pouch-shaped labellum, which is a key part of their pollination strategy: insects trapped in the pouch are obliged to crawl under the anther as they exit and some loose, granular pollen is thereby deposited on their backs; when this is repeated, pollination can occur. While the flowers do not produce nectar, they are often colorful and fragrant, with the labellum often a contrasting color from the petals. Three or more leaves are usually produced along the stem, although leaves can also be basal.

Cypripedium grow in a wide variety of habitats, including forests, woodlands, prairies, bogs, and fens; in their southern range, they generally grow at higher elevation. This genus includes some of the most cold-hardy orchid species, many of which can grow under snow cover and bloom just after snow-melt.

Ethnobotanically, this genus has a long history of use as a medicinal plant as an antispasmodic, nervine, sedative, and tonic - often utilized as a milder alternative to Valerian. 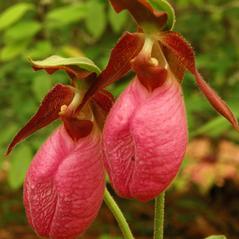 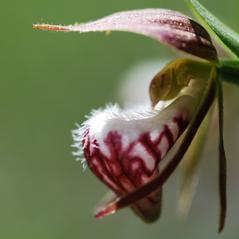