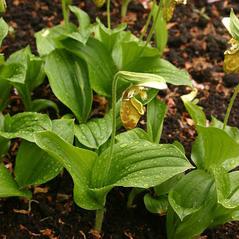 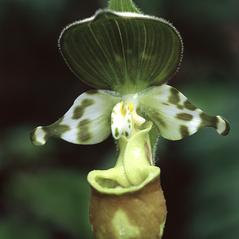 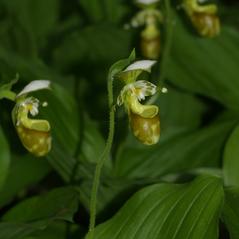 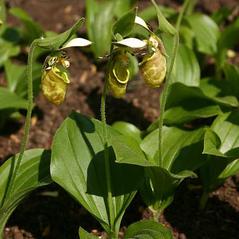 Cypripedium yatabeanum, commonly known as the Palomino Lady’s Slipper, is found in Alaska from Kodiak Island to the Aleutian Islands, as well as in Japan and Russia’s Kamchatka Peninsula, Sakhalin Island, Siberia, and the Kuril Islands. This lady's slipper can be distinguished from the closely related C. guttatum by its yellow-green flower color and its narrower, longer lip. It grows in mesic tundra, swales, marsh borders, hillsides, and sand dune beach meadows. Cypripedium × alaskanum is a natural hybrid between C. guttatum and C. yatabeanum, with splotches of olive-yellow, yellow-brown, brown-purple or maroon, found on the Alaska Peninsula and in coastal southcentral Alaska bogs.

Cypripedium yatabeanum is apparently secure (Japan, Siberia), although it is critically imperiled within Alaska.

Pollinator information for this orchid has not been reported in North America but this orchid forms a natural hybrid, C. × alaskanum, with Cypripedium guttatum, which suggests these two species share a common insect pollinator on the Alaska Peninsula and in coastal southcentral Alaskan bogs.