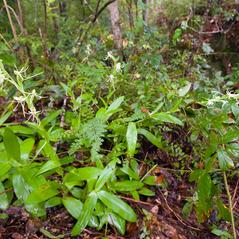 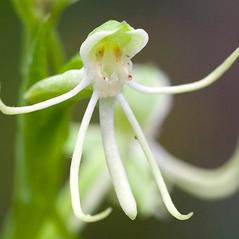 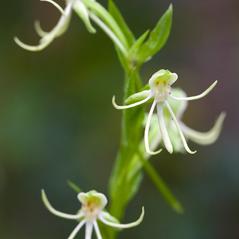 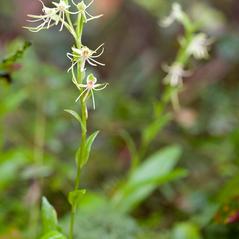 Habenaria quinqueseta, commonly known as Michaux's Orchis, is widespread in northern Florida and occurs rarely in other parts of the southeast. This orchid also grows in the West Indies, Central America and Mexico. This species produces 3-7 glossy bright green leaves that gradually reduce in size towards the inflorescence of 15-25 flowers arranged in a loosely flowered spike up to 30 cm tall. The sepals are light green with dark green stripes and the petals and lip are white. The labellum is lobed and has a club shaped spur usually less than 10 cm long. It blooms in August up north and as early as January at the southern edge of its range. Large colonies of non-flowering plants can be found in the open pine flatwoods and damp woodlands.

Habenaria quinqueseta is apparently secure based on populations in Florida and Central and America, however it is considered critically imperiled in other areas of the southeast.

This orchid is moth pollinated. In observations of moths pollinating Habenaria outside North America, the pollinia are usually attached to the moth’s eyes or proboscis.