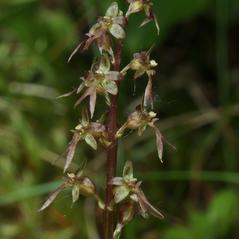 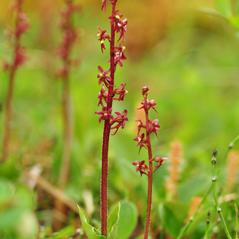 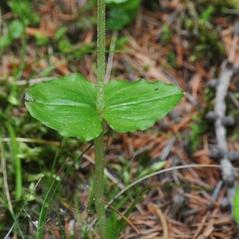 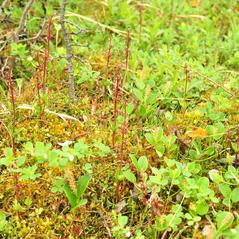 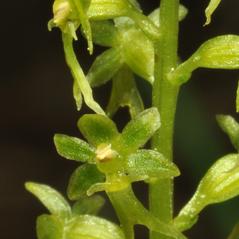 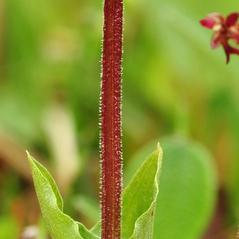 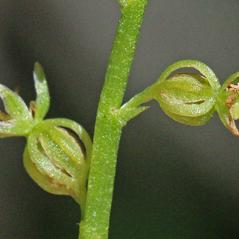 Neottia cordata, commonly called Heart Leaved Twayblade, has the widest distribution of any species in its genus, growing throughout the western United States, across Canada, around the Great Lakes and on the East Coast from North Carolina to Maine. It produces two opposite heart-shaped leaves on its green or reddish purple stem, and bears up to 25 yellowish green or reddish purple flowers. The labellum splits and forms two elongated lobes. This orchid is known to form colonies of several hundred plants. It typically grows on peat-moss hummocks in forested swamps, as well as in moist woodlands and in coniferous or mixed forests.

Neottia cordata is considered globally secure, and is widespread throughout much of its northern Canadian range; it is, however, considered rare in several mid-Atlantic states.

This orchid is pollinated by Hymenoptera in Ichneumonidae and species of Microgaster
and fungus gnats in the genera Mycetophila and Sciara in parts of its range.
Insects land on the labellum and crawl up the labellum feeding on nectar. If the head of the insect touches the trigger hairs on the rostellum, a sticky secretion is released and pollinia are then attached to the head of the insect. This process happens nearly instantaneously once the trigger hairs are touched. The day or so after the pollinia has been released the stigma becomes very sticky and is exposed as the rostellum begins to fold up. Another insect with pollinia on its head visits the flower and crawls towards the labellum in search of nectar. The pollinia comes in contact with the stigma. If no insect successfully removes pollinia within the first four days following anthesis, the rostellum will automatically roll up to expose the stigma for an insect visitor carrying a pollen mass.