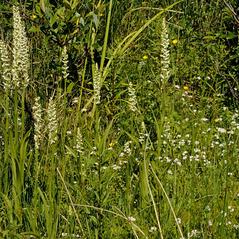 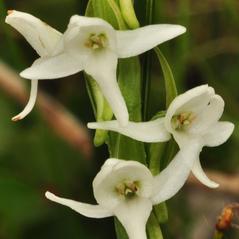 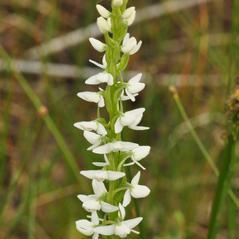 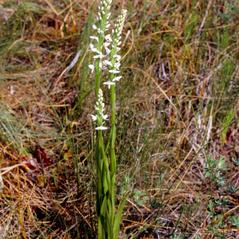 Platanthera dilatata, the Tall White Bog Orchid, is widely distributed across northern Canada and the United States, with populations throughout western and central regions, as well as around the Great Lakes and in the northeast. It produces 2-5 leaves along its tall stem and an inflorescence of up to 65 white, conspicuous flowers. The labellum is distinctly dilated (broader at the base than at the tip), and the flowers have a strong, spicy scent. This is primarily a wetland species, found in wet marshes, fens, bogs, along riverbanks and roadsides, and in wet tundra environments in the northern part of its range. It can be distinguished from P. aquilonis by its white instead of green flowers and by its dilated labellum.

The fragrant white flowers of this orchid may be visited day or night by skippers or the nectar-drinking owlet moth, Mesogona olivata. These moths do not hover while they feed from orchids, but must land on the flower like a bee or hoverfly. The different lengths and shapes of the nectar-secreting spur found in the three varieties of this orchid strongly suggests that different insects pollinate this orchid over its broad range.