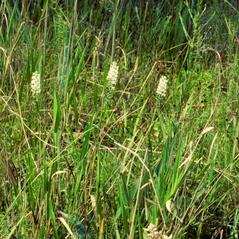 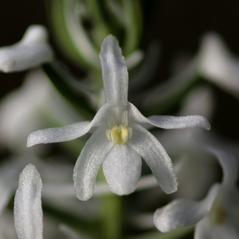 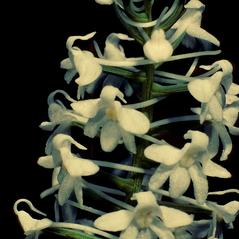 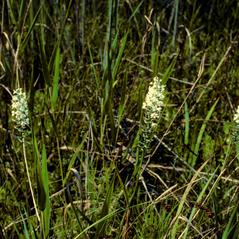 Platanthera nivea, commonly known as Snowy Orchid, is distributed in the southeastern United States from Texas to Florida and in the southern mid-Atlantic region as far north as New Jersey. It produces 1-3 leaves along its stem, and bears a dense inflorescence of multiple bright white, small, non-resupinate flowers. The labellum, which points upwards from the column, is linear and somewhat elongated, and a long, cylindrical spur extends out from the back of the flower. It is found primarily in moist woodlands and meadows, bogs, swamps, and pine barrens.

Platanthera nivea is globally considered secure, although it is considered rare or vulnerable throughout much of its range. It can form substantial colonies of numerous plants, even in areas where it is considered uncommon.

This orchid is pollinated by butterflies and skippers, including Lerema accius. The polllinia attach to the proboscis as the insect probes for nectar then pollen is transferred to the next flower it visits.