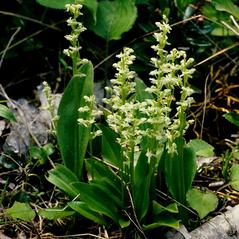 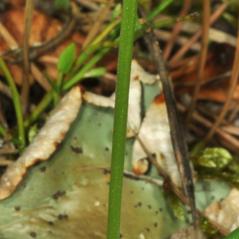 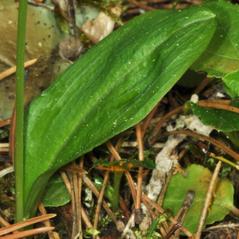 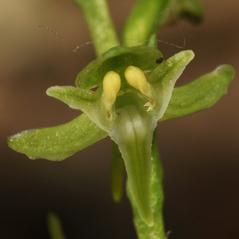 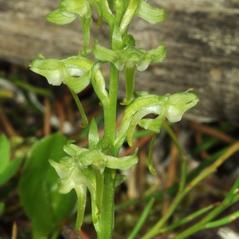 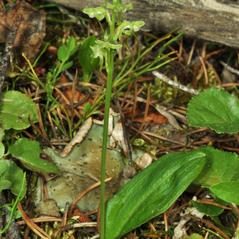 Platanthera obtusata, also called Blunt Leaved Bog Orchid, is widely distributed across all of Canada, the Pacific Northwest of the United States, south to Colorado, around the Great Lakes, and in parts of New England. It produces one (rarely 2) basal leaves, and a loose inflorescence of up to 15 flowers, which are pale green or yellowish green in color. The labellum is often slightly white. The base of the linear, elongated labellum has two small auricles, and a nectar spur extends from the back of the flower. It can be found growing in moist coniferous forests, wooded fens, bogs, swamps, and along riverbanks and roadsides. It can be distinguished from P. clavellata by its linear, more elongated, and entire (unlobed) labellum.

Platanthera obtusata is considered globally secure, and is widespread or common throughout much of its eastern range. Farther west, however, it is considered rare or imperiled in several states.

This orchid is pollinated by moths including Anageshna primordialis, Eudonia lugubralis and Xanthorhoe munitata and several species of mosquitoes including Aedes campestris, Aedes canadensis, Aedes cinereus, Aedes communis, Aedes diantaeus, Aedes excrucians, Aedes flavescens, Aedes hexodontus, Aedes impiger, Aedes nigripes, Aedes punctor, Aedes riparius, Aedes spencerii, Aedes sticticus and Aedes vexans and Ochlerotatus pullatus.
The mosquito enters the flower in search of nectar, which the orchid produces and stores in the slender, downward projected spur. At the slightest touch, the pollinia spring forward and attach themselves by their sticky, discoid base to the head and eyes of the mosquito. On departing, the insect often can be seen carrying on its head what looks like one or two tiny yellow horns. When the mosquito visits a second flower, the pollinia are put in contact with the stigma, transferring pollen.