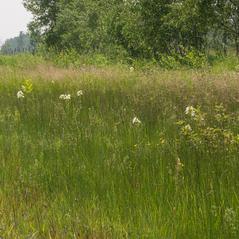 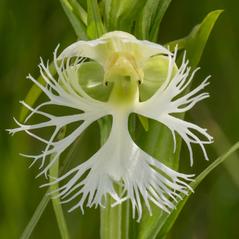 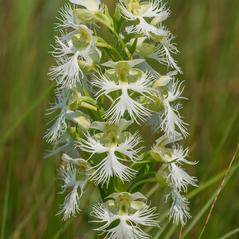 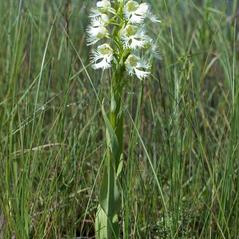 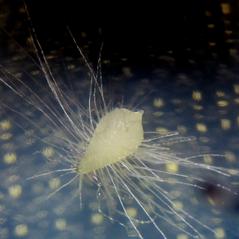 Platanthera praeclara, the Western Prairie Fringed Orchid, is distributed in the midwest United States and Canada, from Oklahoma to Manitoba. It produces 2-5 basal and lower stem leaves, which are present at the time of flowering. The inflorescence has 10-24 creamy white colored flowers with petals that form a hood over the column. The labellum is deeply fringed, with three distinct lobes and a long thin nectar spur. The flowers of this orchid are about 25-30% larger than those of P. leucophaea. It can be found in open wet prairies, plains, and fens.

Platanthera praeclara is considered globally imperiled and is listed as federally threatened and is rare or presumed extirpated throughout most of its range.

This orchid is pollinated by a variety of moths such as Eumorpha achemon, Hyles euphorbiae, Hyles gallii, Hyles lineata, Paratrea plebeja, Sphinx drupiferarum and Sphinx kalmiae. The moth probes the nectar spur with its proboscis. While drinking nectar, pollinia are placed on the compound eyes of the moth then transferred to a subsequent flower it visits.